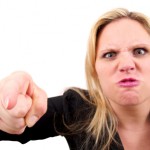 A simple way to control your response to customer’s anger

Here at the conflict training company, we do a lot of travelling around the country delivering conflict management training courses and meeting customers and to be honest, the travel can be a challenge at times; trains delayed and cancelled, motorway traffic jams seemingly going on for miles. If that wasn’t bad enough, there are then some of the driving habits of the other road users!

We can all think of examples, those people who hog the middle lane causing traffic to back up for miles, people swerving around from lane to lane. For myself there used to be a driving habit some people had that used to really wind me up – let me set the scene: You know when you’re on the motorway and two lanes are closing off at road-works and the traffic cones are slowly tapering the lanes down in to the one left-hand lane? And then you have a long line of traffic in this lane patiently pulled in and going really slowly?  So there I am, patiently queuing and there is a little gap in front of me – about a car’s length. And then, this other car shoots up the outside lane and swerves into the gap in front of me…….

Grrrrr! This used to really wind me up – thoughts going through my head like “How dare he?”, “That’s not fair!”, “Why can’t they queue like the rest of us, we’re British!”  and “The *!$%$*# cheeky little #%!*#”.   Anyway, I’d certainly really resent this driver as if they had somehow done me some great injustice.  It would really wind me up.  But there wasn’t much I could do as the traffic slowly moved along. Shake my fists? Flash the lights? Beep my horn? All pretty pointless.  So I would sit there, seething, stressed and resenting.

But that was years ago. Now it doesn’t bother me at all. Why? Because I use a key conflict management training technique – I put it in to perspective:

By using this conflict management skill and taking a moment to put the situation into perspective I now avoid all that negative emotion and resentment.  So, next time you feel yourself getting wound up or resentful about what someone has said or done, just take a minute to put it in to perspective. Was the customer’s comment worth getting upset about, Is it really that bad? Is it worth the stress?  Probably not in many cases.

I’ll leave you with this quote from an Malachy McCourt, Irish-American actor and writer: “Resentment is like taking poison and waiting for the other person to die”.

Until next time, all the best from all of us here at the Conflict Training Company – And enjoy your trip!