Setting things up for conflict - The Conflict Training Company 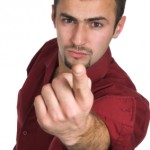 Setting things up for conflict

I had the opportunity recently to accompany a young friend to a busy German Job Centre, as moral support. I can see now why she needed it. It was early in the morning and there was already a sizeable queue; all 12 help desks were staffed and obviously busy. We were corralled within barriers, the likes of which you find in front of cheap airlines’ check-in desks. The atmosphere was morose. People kept glancing furtively at each other but avoiding eye contact. Standing in that line is not for the proud and successful.

Every time we turned a right corner, we’d stand about 3 feet away from a customer being attended to at one of the help desks. It was hard not to catch every single word of the conversation. It was not going well. When the clerk behind the desk started raising her voice, everyone in the line started fidgeting nervously, people were craning their necks to see what was happening with the same strange mix of anxiety and glee we display when passing a car crash on the motorway. There seemed to be language problems involved as the customer kept repeating the same few sentences in broken German, and the clerk responded with a flurry of every changing, complicated words. Tension was rising in the whole room. Eventually the queue moved on and I guess everyone got caught up again in their own problems.

The clerk who handled my friend’s query was friendly and efficient, we were directed to another waiting room, another queue, another clerk, to whom we repeated the same story again. We left the job centre with relief, albeit laden with piles of cryptic forms to fill in.

I was bemused by the whole experience; I’d had so many occasions to hear the staff side of the story and was feeling sympathy for these members of staff trying to do a difficult job to the best of their ability, often with inadequate means. At the same time, I was now looking at the situation from the other end, the customer’s end, and I couldn’t help feeling frustrated and let down. This is the little drama that plays out in nearly every public service office in every country in the world. Two worlds clashing, both unhappy with the result.

Now, stepping out of the drama and putting my objective consultant hat on, a few conclusions spring to mind:

1: It’s no use blaming the customer: there will always be people who are cranky, rude, impatient, scared, incoherent or uncomprehending – just like we all sometimes are. Taking it personally and using it as an excuse for our bad mood or bad performance would be like being a street cleaner complaining about people littering. It’s not nice but it’s a fact of life and it’s our job to deal with it (within reason).

2: It is however, of great use to give the member of staff as much back-up as possible. This includes:

– structures which are as service-user-friendly as possible, which will greatly facilitate staff’s work: access to translators, training staff in communicating effectively with non-native speakers, reasonable privacy, simplified structures and forms, healthy environments.

The task of dealing with needy/angry customers is hard enough in itself; let’s not set things up to make it even worse.